You Stupid Boy
Home NZ Politics Yet another Leftie liar 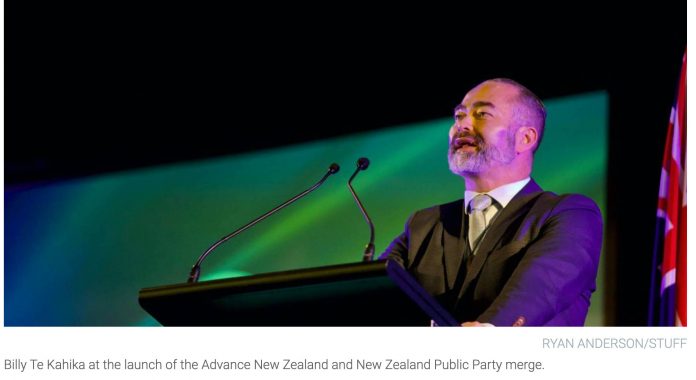 The leader of the fringe New Zealand Public Party says he is a politician who doesn’t lie but doubts have emerged over his claims about his military and police background.

Billy Te Kahika, who is standing in the Māori seat of Te Tai Tokerau and has linked up with Jamie-Lee Ross’ Advance Party, is filling halls around the country with descriptions of Prime Minister Jacinda Ardern as a communist threat and Covid-19 as a hoax. He also likes to talk about his background.

At a presentation at the Akarana Yacht Club in Auckland in June, he told an audience he had joined the army to be a Special Air Service (SAS) soldier and had done three introductory courses to enter the military intelligence corps.

“That is what gave me the discipline to research and study the topics we are talking about tonight and really find out about them,” he told the audience.

“From there (SAS preparation), I wanted to get into the military intelligence corps, and they said to me ‘you are going to be a great guy to go to East Timor because you’ll be able to blend in’.”

In his account to the audience, his deployment was cancelled after he got in a punch-up at the Waiouru army bar.

In a later interview with Waatea News he said he was “military intelligence trained”.

Te Kahika told Stuff he had never claimed he served in the military intelligence corps although he believed the three introductory courses were solid training, and he had received good grades. He wasn’t accepted into the corps probably because he was too “colourful”.

According to his account to the Akarana audience in June, he sailed through the selection process for police as a “meritorious candidate” but before he graduated he wanted to clear up a failure by his recruiters to record him being found with a roach outside the Gluepot Tavern in Ponsonby, Auckland, when he was 16. The recruiters had told him the arrest wasn’t worth worrying about.

He wrote an official report and senior police had told him that by exposing the failure, one of the recruiters, a veteran about to retire, could lose his pension and job.

“So I have seen the dirty side of Government,” he told the audience.

The police had given him a choice. “Either I push this thing and stay in the police and this guy loses his job or resign. I resigned without question.

“It was one of the great resentments in my life because what I should have done, I should have blown the lid, stayed there and pushed this through.”

In his interview with Stuff, Te Kahika said after raising the issue of his arrest as a 16-year-old with senior police, he came “under inquiry” and he was fingerprinted. “The pressure came on” and he didn’t want to get anyone into trouble. He was having marital problems and his marriage broke up soon afterwards.

“The pressure got to me.”

He told his Akarana audience: “I knew when I launched this someone was going to say you got fired from the police, which is a lie. I don’t have any skeletons in my closet. And I want to talk about this, because you know what politicians do – they lie, and I’m not a liar. I don’t want to be a politician you can’t trust.”

A police spokesperson said for privacy reasons all police would say was that Te Kahika joined police as a recruit in May 2003. His employment ceased in July 2003.

An NZ Defence Force spokesperson said Te Kahika served in the New Zealand army from September 2001 to January 2003. No further comment was made.

Why do all budding politicians seem to have the need to lie. We already have enough now who do it on a daily basis. It would be refreshing to have a new politician who doesn’t start their career by LYING.